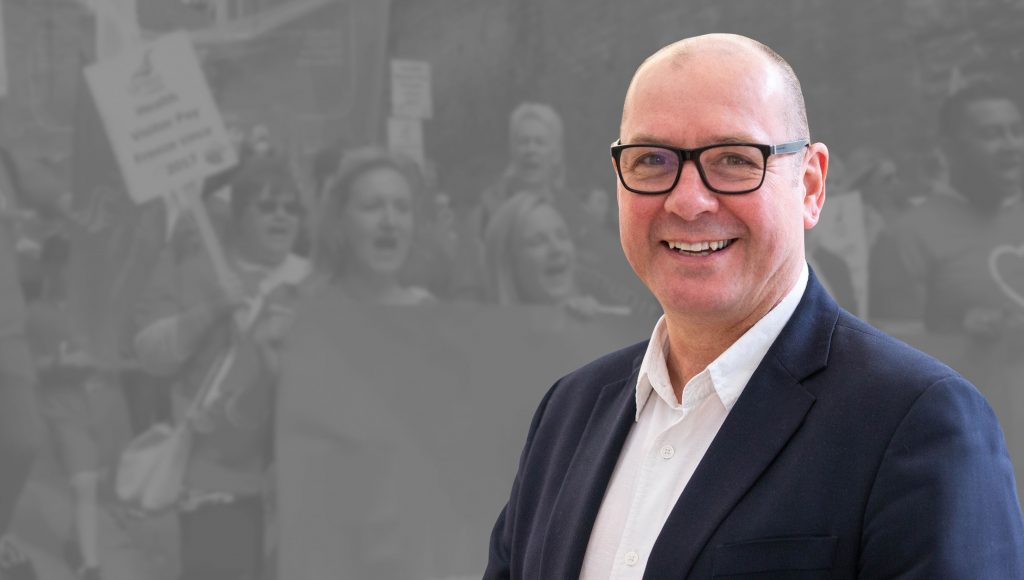 I will be the greenest general secretary of our labour movement.

The climate crisis is the biggest challenge our society faces. Dozens have died in Canada and the US as temperature records have been smashed, and there are devastating floods in Europe.

Shaping the future of work and greening our economy is the challenge of our generation. I’m determined that Unite will lead a green jobs revolution that will be the backbone of a zero-carbon economy.

I will establish an Industrial Strategy and Green Transition Team to support our efforts to shape the future of work and leave no workplace or community behind as we transition to a greener, cleaner economy.

You can read my Workers’ Greenprint plan here  or watch my video about my plans to put working people and our communities centre-stage to meet the challenges of the climate crisis.

I’m the leading negotiator of my generation, with a track record of saving and creating jobs second to none. I am proud that is how our members judge me.

When this coronavirus crisis hit, I worked night and day to drag ministers to the table, to nail down the furlough programme and keep a wage coming in for 11 million workers.

I battered down doors and forced this government to get on board to bring the UK’s first Gigafactory creating 6,500 green in Sunderland and support thousands more with the UK’s first electric van plant in Merseyside.

My demand for a Gigafactory at Coventry airport has been actioned by the West Midlands mayor, and I negotiated with Rolls Royce the creation of a ‘centre of excellence’ training school supporting the development and manufacture of zero-carbon technologies.

No other candidate can claim to have the ambition and the plan to build a greener, fairer economy built on full employment, better pay and conditions, employment rights, equality, education and skills alongside a better environment and future for our kids and planet.

How we rebuild our economy and our communities out of the pandemic and address the climate crisis are undoubtedly the biggest issues facing workers in the UK today.

We know that the Tories will do what they always do: make our communities pay for their disastrous mishandling of the crisis, with the hardest economic hit and biggest loss of life in Europe. Shamelessly, they’re starting already.

The pay insult to our NHS and local government workers is a disgrace – little over £1 a day, not even enough to buy a loaf of bread – which is why I will lead Unite’s fight to win pay justice and drive the privateers from our public services.

Our sick and elderly will be landed with higher prescription charges, and their life-long retirement savings, their pensions – already the worst in Europe – will be drained by Rishi Sunak as he patches up the economy on the backs of our people.

Snatching back £20 from Universal Credit destroys a lifeline for low paid workers and the unemployed, cash that put shoes on their kids’ feet, a coat on their back and pays for food and heating.

I am already leading the call to force the government to continue with mandatory masks and will continue to press for massively increased sick pay protection so that our members can afford to stay home.

I intend to get the fundamentals in our union right. My ‘One call that’s all’, freephone number will ensure members get expert support from their union when they need it. I will invest in new technology to improve the way the union delivers for our members, including a Unite Assist app giving members and reps the information they need 24/7.

I will empower our members to fight back against the attacks on their pay and conditions through a massive increase in our education and training programmes.

No other union will be impacted by the need to tackle the climate crisis as Unite will. From oil and gas to energy generation, steel and automotive plants, construction sites, warehouses, food production, finance, transport and our public services, Unite members are at the core of our economy. They stand ready to deliver the infrastructure that the green economy needs, building everything from turbines to green homes.

My pledge to be the greenest general secretary is backed by my record. I’ve said above that I will establish an Industrial Strategy and Green Transition Team.

I look at the potential of a green manufacturing revolution and I see massive opportunities.  I see the hundreds of thousands of secure and decent jobs it could bring in the short-term, and the millions it will create from 2030 onwards.  I want those jobs for Unite members. I’m determined to deliver them.

My ‘Workers Greenprint’ for jobs sets out how intelligent investment by the government can stimulate green jobs growth, return huge sums to the economy and ensure that no sector or worker loses out.

In construction, Unite members will build the million new homes we need and fit-out existing housing stock so that they become decent homes again.

Our North Sea assets will convert to capture cleaner energy, our auto sector will build the electric and hydrogen vehicles and our aerospace members will produce greener aircraft. Our NHS and local government workers will work in greener buildings, converted by Unite members – and our children will breathe clean air.

This is not some far-off utopia. I’m developing jobs plans with businesses across the country. Look what I’ve achieved already with Nissan and others.

The fly in the ointment is the government which wants the plaudits but without the hard work or investment. But I’m banging on their doors and they know I won’t rest.

I will grow our union through organising in expanding sectors of the economy, such as IT, social care, online sales and the gig economy, as well as membership growth in existing Unite workplaces.

I’ll get gig employers around a table to force them to see the sense in working with us to do the decent thing by employees or face our storm – I’m already in discussions with Just Eat about how we do just that.

I am determined to bring young workers into Unite membership because they need union protection most.

For too long, Unite’s organising approach has dismissed the importance of organising in the gig economy. So many of these workers are young people and students. If they don’t have contact with a trade union at that stage of their working life then they won’t understand the importance of union membership when they go on to work outside of the gig sector.

I will also bring union organisation to homeworkers, the falsely self-employed and workers on insecure contracts – giving a voice to millions of working people.

easing the financial pressures on our members while ensuring their union is by their side 24/7.

Ultimately, working people prosper when trade unions are strong, and under my leadership, Unite will be that strong, confident union.

I was proud to develop Unite’s political strategy. Its stated aims are simple: elect people to office who understand and will advance working people.

It’s led to some real talent emerging in our nation’s governments and rising stars in local authorities.

If we didn’t do this there’s no chance that someone on an average wage could ever stand for election. A warehouse worker won’t have the ability to simply take 12 weeks off to campaign without Unite’s support.

Voters already look at Westminster, the devolved parliaments and councils and feel disconnected. Too few politicians look or sound like them or understand what their daily lives entail. So, if we want our democracy to stay healthy, we have to do something about that. I want our members to feel their issues are recognised and experiences respected.

What chance do we have of arresting the climate catastrophe unless green activists work alongside organised labour? Anyone who holds social justice dear should work with my vision of a green-led Unite to ensure our kids can breathe.

Our political strategy gives our communities a chance to be heard and to deliver the laws and change that our people need, such as Barry Gardiner’s bill to ban fire and rehire.

It means that Unite doesn’t hesitate to speak out on attacks on our liberties, like the police and crime bill that will suppress our ability to protest, and the voter ID bill which will make it harder for BAEM and low-income people to vote.

It also means we deliver top quality political education to thousands of members each year, eager to understand the nature of power in this country.

I am determined Unite’s political strategy not only continues but goes from strength to strength. Unite members need a strong, experienced leader at the helm for the challenging times ahead, because the Nasty Party never went away.

One thought on “Steve Turner: “I will be the greenest general secretary of our labour movement””