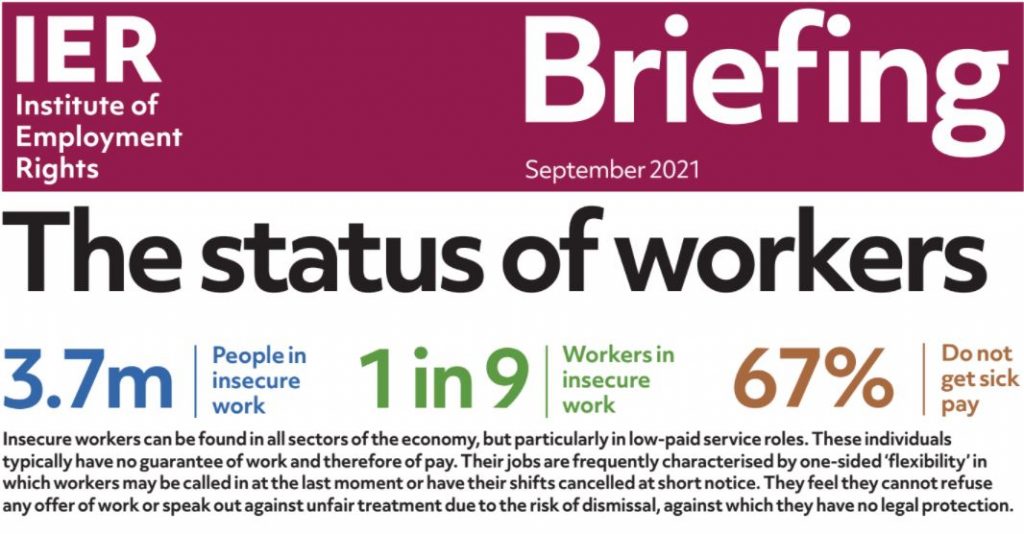 The Status of Workers Bill passed the second reading in the House of Lords on Friday with almost unanimous support from Crossbench, Conservative, Green and Labour Party peers. The Bill will now pass to the committee stage.

Currently, people in employment can be legally defined as ’employees’, ‘limb (b) workers’ or ‘self-employed’ under the Employment Rights Act 1996. While employees enjoy the full suite of workers’ protections, limb (b) workers – many of whom are on zero-hour contracts or working in the gig economy – are eligible for only the most basic of rights. Self-employed individuals have no workers’ rights.

The Bill would end this distinction in law between ‘workers’ and ’employees’, seeking to end the misclassification of workers and ensure they are given full statutory protection. It would do this by creating a single, unified category of ‘worker’ guaranteeing full rights to all.

It also legislates to prevent the phenomenon of ‘bogus self-employment’, a practice in which employers mislead workers into accepting ‘self-employed’ status. The Bill puts the onus on employers to prove that their contractors are genuinely self-employed.

The Institute of Employment Rights estimates that 3.7 million UK workers are in insecure work with no guarantee of minimum hours or minimum take-home pay. The majority of these work under the existing categories of ‘limb (b)’ worker or bogus self-employed which the Status of Workers Bill targets.

“Times of economic hardship and recession are known to accelerate the growth of precarious work and the impact of the Coronavirus pandemic is no exception – we have already seen several major retailers fall into the hands of employers known for using insecure contracts.

“For years, this state of affairs has been justified in the name of ‘flexibility’ but there will be nothing to prevent employers from negotiating flexible conditions with their workers under the terms of this Bill.

“Instead, the proposals laid out in this Bill will provide for true flexibility, for both workers and employers. The reality is that a casual worker is unlikely to turn down a shift if they risk never being offered another, but when a worker has rights, they can make flexibility work for them too.”