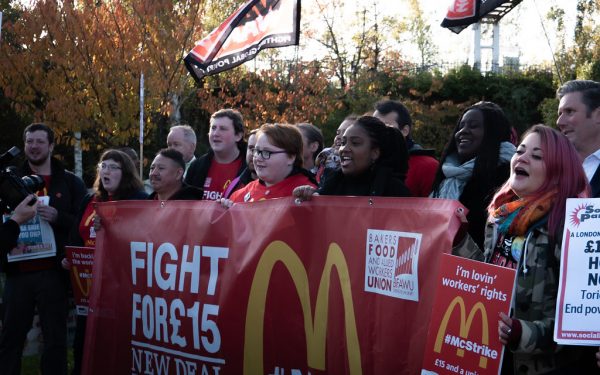 The Green Party today voted to extend solidarity to the Bakers, Food & Allied Workers Union (BFAWU) and support their ‘Fight for 15’ campaign for a £15 minimum wage.

The BFAWU disaffiliated from the Labour Party in September 2021, citing the Labour leadership’s refusal to campaign for a £15 minimum wage. The breakaway marks a first for the union, which was a founding member of the Labour Representation Committee in 1902 and had been affiliated to the Labour Party ever since.

The motion passed at Green Party conference, which was supported by the Green Party Trade Union Group and secured almost unanimous support among party delegates, called on the Green Party’s co-leaders to extend solidarity to the BFAWU and committed the party to supporting their £15 minimum wage campaign.

“Working as a hospitality worker in one of the most expensive cities to live in outside of London, you’re lucky if you can take 50% of your pay after rent and bills.

“We desperately need a £15 minimum wage and we need strong trade unions that are fighting for that like BFAWU, especially in some of the jobs most at risk of climate change like mine – coffee – and I’m glad that the Green Party has supported my motion.”

“I’m delighted that Green Party Conference has extended solidarity to the BFAWU following their disaffiliation from the Labour Party, and backed their campaign for a £15 minimum wage workers can truly live on.

“With the Liberal Democrats nowhere to be seen, and the Labour Party failing workers at every turn, the Green Party must step up and truly represent working people in the face of this Tory government’s brutal attacks on our living standards. This motion is a statement of intent that workers and their unions have home in the Green Party.”

Following the passing of the motion, the BFAWU responded on Twitter saying: “Many thanks for your support and solidarity. We need to build a society that we can all afford to live in.”

The motion is just the latest intervention by the Green Party seeking to improve the living standards of workers, as price inflation rises and a winter of increasing fuel poverty looms. On the Conference’s opening day the co-leaders pledged a one-off winter fuel payment of £320 to each household, funded by a land value tax on private landlords.