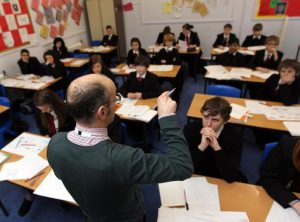 This article was written by Matthew Hull, Chair of the Green Party Trade Union Group.

Last week the government’s School Teachers’ Review Body published its 31st report, concluding that most teachers will see pay frozen, with the exception of those earning less than £24,000 per year full-time or the part-time equivalent. This result, which the NEU branded “unfair”, means a year of frozen pay for most educators. Indeed, in the light of the rate of consumer inflation it means a real-terms pay cut.

The decision originates with Gavin Williamson, who limited the body’s remit so as to prevent it from recommending a pay rise for educators. His actions punish educators and other school workers after perhaps the hardest 18 months in their recent working lives. It is manifestly unfair and unacceptable. It is unfair not least to a profession which has become the one of the government’s favourite punching bags and scapegoats, a target of culture-war slander and blamed for doing too little with the few resources the government makes available to it.

But beyond this, the School Teachers’ Review Body report contains clear warning signs that without urgent action the future of state schooling in this country is under threat and could become even more unsustainable.

The report makes for interesting reading. It clearly strains against the limited remit given to it by Secretary of State. The frustration of its authors is almost tangible. But ultimately, it reports back what Gavin Williamson wanted: another year of relative austerity in school pay.

It starts by trying to oversell conditions of the labour market for teachers.

Much is made in the report of an increase in levels of recruitment to initial teacher training, up 23% this year on the previous year. But considering the depths recruitment had plumbed beforehand, it is not clear how helpful the comparison between 2020 and 2021 really is. After all, a percentage increase on a historically poor year doesn’t necessarily tell us too much in raw terms.

The profession’s leaving rate overall was down from 9.6% to 9.2%, between 2018 and 2019. This is welcome, to be sure, but also surely nothing to write home about. Especially as the leaving rate among early career professionals (in the first 3 years after qualifying) is a whopping 27%. The picture then appears to be one of marginally higher retention in later career educators, while many young professionals choose to get out as soon as possible. Paradoxically, the effects of this could be felt most keenly in areas outside major cities where the teaching population is older and younger graduates are much scarcer. Unless this trend is reversed, there is a very real prospect of swathes of the country becoming empty of younger teachers and of the profession failing to reproduce itself.

The report does, however, make important observations about the relationship of schools staffing levels with the wider labour market.

The last 18 months has seen the labour market in flux, as the UK experienced a historically deep and pronounced depression of national income. In this context, it is highly plausible that young people have entered initial teacher training in somewhat higher numbers. After all in a loose labour market, with relatively few entry level openings in other white-collar professional jobs, teacher training can appear even more attractive. This is appealing as a basic explanation for the uptick in initial teacher training recruitment in the last year.

But as pay in the private sector picks up – and early data suggests it is beginning to do just that – the task of retaining graduates becomes a more complex and tricky one. Teaching recruits highly educated graduates, and the teaching profession is therefore in direct competition with other graduate-employing sectors for a sustainable workforce. In 2008, amid wider recession, the teaching profession recruited handsomely among graduates scrambling for a route into work. But that recruitment was not sustainable as teachers’ pay suffered relative to their peers in the private sector. There is a very real worry that this pattern will be repeated in 2021.

As teachers’ workload increase, and as the remunerative offer and broader working conditions deteriorate relative to other careers, what is to stop educators leaving the profession early in their working lives?

This rhetorical question is anything but rhetorical to the report’s authors. They make clear that it is the defining question the Secretary of State should be asking himself. As they put it:

“The profession’s ability to recruit new teachers is inextricably linked to the wider graduate labour market. As such, the sustainability of the improvement in ITT [initial teacher training] recruitment, and the extent to which shortages in specific subjects are addressed, will depend on how competitive teaching as a career is in relation to the wider market.”

Or even more bluntly:

“A pay pause for teachers of more than one year risks a severe negative impact on the competitive position of the teaching profession.”

This is pretty tame – which is to be expected from any pay review body. And it understates the scale of the problem. A pay pause this year is already going to begin making the teaching profession less and less sustainable.

Poor welfare provision, high intensity at work, and a sense of being treated by the government as a blue light service and social care provider of last resort – not to mention as a prop in a reactionary culture war – risk making teaching less and less desirable to workers. And besides being grossly unfair to the educators who have kept our schools going throughout the pandemic, this is also a threat to the UK’s education system in the longer run.

The report’s authors conclude by urging that they be allowed to review all teachers’ pay next year: “[We urge] that we be allowed to fully exercise our role in making recommendations on pay uplifts for all teachers… for 2022/23, based on the evidence.” It is hard to see this as anything other than a veiled warning to Gavin Williamson: the sustainability of our public schooling is in grave danger. His track record suggests that it is a warning he will not heed unless unions, campaigners, and political opposition force him to reconsider.

One thought on “View: More austerity would plunge our schools system into crisis”