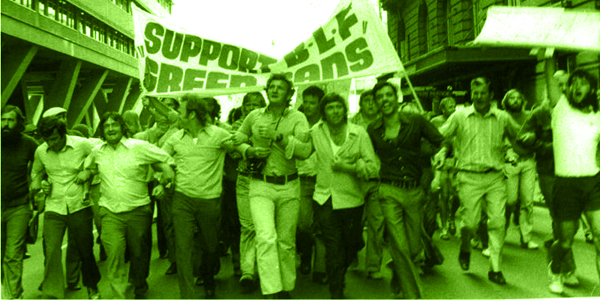 Written by Lee Booker, a Green Party member and Health and Safety Rep for the Union of Shop, Distributive and Allied Workers (Usdaw). The Green Party Trade Union Group publishes an array of different views and perspectives, on both Green Party and labour movement topics. If you want to write for our blog, please contact us today.

With the elections for the Green Party leadership and Executive just around the corner, trade unionists should be looking for candidates who are committed to linking up the environmental movement with trade unions and expanding the Green Party’s support base.

Trade Unions and the environmental movement have historically not always seen eye-to-eye. These divisions have been based around the drive by the trade unions to protect or guarantee jobs sometimes at the cost of environmental goals  – see, for example, GMB’s prioritisation of nuclear power over Green Party policy ambitions. However, trade unionists were also responsible historically for initiatives such as The Lucas Plan which called for a change over 40 years ago towards cleaner and renewable energy. Communities’ and workers’ concerns about the security of jobs in their area is understandable and reasonable; the Green Party should ensure the environmental movement is seen to work with these causes, promoting ecologically sound alternatives, as opposed to the removal of people’s livelihoods. This is where the trade union movement comes in.

However, the trade union movement has battled these conditions before, and with the rise of independent workers’ unions across the country (including the IWGB and United Voices of the World), it is clear that workers are still willing to organise and confront these new conditions. Many of the campaigns of these smaller unions have focused on more than just wages, these include the right to sick pay, holiday entitlement, better contracts and better working environments. The Green Party’s wellbeing economy policy would work well with these campaigns in addition to the Green Party championing policies that re-empower trade unions in the UK (such as by repealing the 2016 Trade Union Act).

In addition, the rise of the private rented sector amid a housing crisis has seen a resurgence of tenants’ unions, overseen by dedicated organisers. To take one example, ACORN tenants’ union continues to experience growth across England and Wales, alongside Living Rent in Scotland. ACORN’s campaigns often focus on environmentally-inflected issues, such as living conditions in accommodation. After all, health issues created by environmental factors should be part of any environmentalist cause: the right to live in a healthy environment should be sacrosanct. And this focus among radicals is not new: in his influential study The Condition of the working class in England Friedrich Engels studied working class living conditions in the late 19th century. A significant focus is the environmental causes of poor health, from pollution through to housing design, which enabled the rapid spread of communicable disease.  The same arguments ring true today, and all of these issues are interlinked to people’s employment rights, housing rights and the state of our economy. ACORN have a track record of opposing climate destruction on their social media and have also recently campaigned to take back ownership of bus and rail services into the public sector; this focuses on cheaper transport for working people, but equally highlights the role of costly and inaccessible public transport in driving people to use cars. It is clear how this contributes to spiralling levels of CO2 and other deadly air pollutants.

The apparent conflict of interests between unions that prioritise job creation through stimulating economic growth, and an environmental politics that calls for degrowth policies, may not always be easy to overcome. But unless we work closely with trade unions, we will be ceding ground to other political actors. Trade unions often dwell in the heart of traditional productive industries, such as steel works, construction and the power generation; yet at the same time they can also thrive within other sectors – take for example our emergency services like the NHS and the Fire Brigade. Working with unions means we can push for transitional policies that protect communities and jobs, offering schemes like re-training and job retention, whilst engaging and politicising the very workforce with the knowledge and expertise needed to bring about that transition to a zero-carbon economy. Recently the Conservative government cut funds to unions’ lifelong learning scheme; these are the types of policies a Green Party leader should be opposing vocally. Supporting the trade union movement, calling for the use of lifelong learning schemes to include environmental education, using such schemes to aid the transition from fossil to renewable energy generation for workers: all these could be Green priorities.

In her 2020 book Working-Class Environmentalism, Karen Bell rightly criticises the failures of the environmental movement to engage with and include the working class, citing the overbearing influence of the middle class. She not only discusses the impacts our environment has on poorer communities but also discusses the importance of trade unions for increasing the scope and appeal of environmental politics. It should be recommended reading for any Green Party members who wish to engage with and learn more about these issues. The ‘grow-or-die’ agenda is constantly reproduced and reinforced by our capitalist social system, often primarily for the benefit of a tiny percentage of the population. Organised workers in trade unions have the power to withdraw their labour and go on strike; this is the most powerful tool the workforce has against its exploitation. As Jason Moore argues in his 2015 book Capitalism in the Web of Life, economic and environmental exploitation are fundamentally linked in our economy, as many industries take “free gifts of nature” (such as coal and oil) to accumulate surplus value. A labourer is exploited both economically and for their own nature (as a part of nature, human labour being used to profit others is also exploitation). The workforce in a special position to potentially have a stronger say over the operations of businesses by threatening to strike (Moore, 2015).